I must have spent most of my life facing one keyboard or another. Over a year ago, while facing a musical kind, I was in a weird whimsical mood and I wrote a tune based on the digits of pi.

It did not surprise me when I discovered I was on a well-beaten path, as a search on Google quickly reveals. After all, many pi-inspired feats have been accomplished, such as setting Edgar Allen Poe's poem "The Raven" to the digits of pi. See also the honourable mention in this ray-tracing competition.

The pi music I found was quite abstract, whereas I want mine to sound more standard. I chose to have the digits 1-7 represent the tones of the C minor scale, altered if necessary, while 8 and 9 wrap around, that is, I encoded 8 and 1 the same way, as well as 9 and 2. Accordingly, I would have treated a 0 as a 7 but the tune ends just before reaching the first 0. (Thus 31 decimal places are encoded, this number fortunately corresponding with the first two digits of pi.)

This is akin to jianpu, a numbered musical notation system which I see in many Chinese books, but have never encountered in the Western world though supposedly it has seem some use in Europe. My scheme differs in that with jianpu, one would normally notate a minor key starting from 6, not 1.

It's a shame jianpu is not more widespread. It is well-suited for quickly and concisely jotting down simple melodies. A blank piece of paper suffices: there is no need to rule a music staff first. Writing numbers and dashes can be done extremely fast and most people are accustomed to this, unlike drawing geometric figures. More sloppiness is tolerated, as it is easier to identify scrawled digits and dashes than it is to figure out which line or space a hastily-scribbled note lies on, or whether a certain dot belongs to a note or was just a slip of then pen. Jianpu is also easy to learn due to its logic and simplicity. (Of course, jianpu performs terribly for even a slightly complex piece.)

(To be precise, jianpu-like notation is in fact employed in Western music. For example, when one writes "C6" to denote a chord, the "6" refers to the sixth note of the major scale.)

I added extra notes in order to produce a repeated motif typical of tunes. Following the digits exactly produces a melody that sounds a little too random for my tastes.

I chose conventional chord progressions. The A section uses a chromatically descending bassline, and the bridge mostly follows the cycle of fifths.

The time signature is 3/4, as this resembles 3.14 superficially. Also, in early (Western) musical notation, this time signature was represented with a circle.

I had intended to post it only once I had made some recordings (ideally after working on Bliss) but I have enough on my plate as it is. Maybe next Pi Day.

Anyway, it feels like an auspicious time to release it, as I happened to have recently released version 0.3.14 of the PBC library. And not too long ago Akira Haraguchi broke the world record after memorizing 100,000 digits of pi.

The lead sheets were created using Lilypond. The Lilypond website convincingly argues that their software automatically produces better sheet music than their major competitors, including commercial ones. It's also easy to integrate its output with HTML: 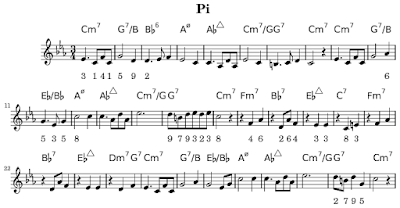 Incidently, around the same time I also penned a tune that loosely encodes a friend's name, but using a different method: