My trusty IBM Thinkpad X31 that Stanford bought me in 2003 has taken everything I've dished at it with only a couple of cracks in the case to show for it. At least, until recently. One awful afternoon, after hitting the power button I was briefly greeted with the message "Fan error" before it shut itself off. No amount of coaxing would bring it back.

My desktop is truly ancient, dating back to the last millennium, so I had grown accustomed to doing most tasks on my laptop instead. The first task was to retrieve my data, which is easily achieved with a SATA/IDE to USB adapter. Only one screw needs to be removed to retrieve the hard drive.

I was tempted to take the easiest but most expensive path: shell out for whatever passes for the best of the Thinkpad X series these days. But although working in industry means this remedy wouldn't sting as much as in my student days, it also means I don't spend as much time on my own machines. Now there's other things I'd prefer to get for that kind of money. Similarly, I didn't want to pay for it to be serviced.

My only recourse was to attempt a repair myself. The Lenovo webpage about servicing the Thinkpad X31 spooked me a little. What's going on in that diagram? Do I have to take it apart into a hundred pieces just to replace a fan? The table suggesting that fan replacements should not be undertaken by end users wasn't encouraging either. With a heavy heart, I ordered a 67P1443 fan anyway.

When it arrived, enthusiasm and impatience triumphed and I took out every screw I could see, but the fan remained elusive. Eventually I regained some sense, and Googled for "thinkpad x31 disassembly". The first result contained a links leading to the official Thinkpad X31 hardware maintenance manual. I should have known. What isn't online these days?

Fan replacements turn out to be almost trivial. After removing the battery and hard drive, I only had to remove the four clearly indicated keyboard screws, and then slide the keyboard out. Underneath, I discovered the reason for the fan error. Nestled in the fan blades was a tiny piece of foam, sticky on one side and rose-tinted on the other. A pink pad in my Thinkpad. 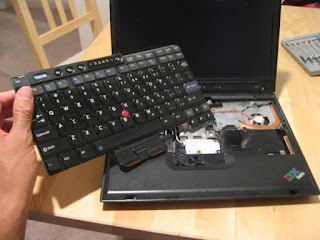 I suspect that the fan is still operational, but since I had a new one and had already removed the five screws securing it, I replaced it anyway. Also, it's easier to apply thermal paste to a new fan than clean and reapply to an old one.

The tougher part was figuring out where the pink pad belonged. There was another one in there somewhere that also looked like it had been slightly dislodged. I settled on pressing both of them against some metal frame in the center, where I presume they work best as shock absorbers. 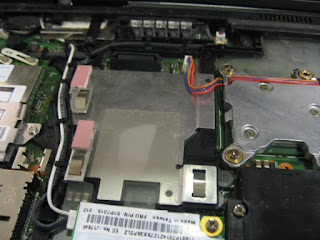 Soon after I received my laptop I wrote a webpage about Linux on a Thinkpad X31. Only when I started blogging did I realize it would be much easier (for me at least!) to maintain with blog posts, and that's probably what I'll do in the future if I have more to add. Sure, it's nice to have all information in one place, but this can be approximated through appropriate use of tags. Furthermore, the dates on each post may also give the reader some idea of how relevant it is.
Posted by Ben Lynn at 3:48 PM

thank you. you just saved me $$ purchasing an IDE cable and new fan! All i needed was to open it up and clean it out. The bigger deal is you pushed me through my own intimidations! Melissa

Can you help me with my x31? The system all the sudden doesn't seem to want to turn over. I power on the system and it turns on... or so it seems, but there are no post beeps and nothing appears on the screen. Like it is just sitting there. Doing nothing. I tap all the keys and nothing. No keyboard beeps. External monitor shows nothing. I removed the keyboard, fan spinning. Power supplies seems okay. Any thoughts?

nice - I had/have the same problem... try re-seating your memory

I found the part number on the ThinkPad site, 67P1443, and then I typed that into Google.

I picked one of the first results and ordered. It was about $50, low enough so I'd rather buy the part and repair my laptop, rather than buy a new laptop. I didn't compare prices much so maybe you can find much cheaper places.

Hi, I am having a problem with my fan. I bought a new fan, and tried to replace it, but my old fan wont budge..

Basically, I am unable to remove 2 of the screws securing the fan. Can you tell me the screw number/tool you used?

I don't remember. I have screwdrivers of many shapes and sizes, and one of them fitted nicely. I could be wrong, but I recall using the same screwdriver to easily take out all the screws securing the fan.

Soon after cleaning the fan in my X31. the noise level from the fan has increased but the system operates as usual. Do you have any idea why there could be a increase in sound?

You may find its only louder because you had slowly got used to the noise reducing over time due to the fluff and dirt on it. When you cleaned it BAM the fan is running at full speed and displacing the maximum air it can which also means the maximum noise.

sweet! had such a hard time figuring out how the bloody hell to get to the fan.

THANK YOU for the time you spent on this post. Thanks to you, another (three-weeks-out-of-warranty) X31 has recovered from a dirty fan -- and now I know how to replace it myself.

Same problem. Started with loud fan noise and vibration. Sounded like a helicopter was inside my x31.

After a while, fan error, and it just wouldn't start. So I did mouth to fan resuscitation, by blowing into the opening as hard as possible. And it lives again, for another day.

To date, that is what I do in case of fan error. I guess I'll take up the elective when resuscitation doesn't work anymore.

In any case, what do think, of the newer Thinkpads by Lenovo? I was planning to change my 6 yrs old x31 to x200. But I'm having second thoughts as few of my mates are claiming their Lenovo Thinkpads are no longer as reliable as IBM Thinkpads. Your take?

Sugih, a thousand thanks! You've just saved me a whole lot of trouble with the recusitation tip!

This is very helpful!!! I got "Fan Error" today with my IBM X31 and I found your topic then I follow your step and now it fixed!

I solved the same fan error problem and want to pass on a tip that the fan is fairly easy to clean instead of buying new. The thin metal cover bends off and then the plastic fan slides out exposing an axle and magnets. I used alcohol to clean the grime then the slightest touch of lube on the axle and it spins like a champ again. Hope this helps the next guy... thanks all for the tips! mine is working again.

Works wonders, thanks! I just opened and closed my X31 within twenty minutes :) There was a complete dustbunny sleeping between my fanblades, after removing and cleaning the fan it runs fine again.

BTW removing the hard drive is not necessary to complete this operation.