John Carmack indirectly controlled significant chunks of my life. For hours at a time, I would fight in desperate gun battles in beautiful and terrifying worlds he helped create. On top of this, the technical wizardry of id Software’s games inspired me to spend yet more hours learning how they managed to run Wolfenstein 3D and Doom on PCs, in an era when clockspeeds were measured in megahertz and dedicated graphics cards were rare.

I read about cool tricks like binary space partitioning, and eventually wrote a toy 3D engine of my own. The process increased my respect for the programmers: it’s incredibly difficult to get all the finicky details right while sustaining good frame rates.

I was flabbergasted by Carmack’s thoughts on the Haskell language. He starts by saying: “My big software evolution over the last, certainly three years and stretching back tendrils a little bit further than that, has been this move towards functional programming style and pure functions.”

He then states that not only is Haskell suitable for programming games, but moreover, thinks Haskell may beat typical languages by roughly “a factor of two”, which “would be monumental” and “a really powerful thing for game development”. He has even begun reimplementing Wolfenstein 3D in Haskell as part of a “sneaky plan” to convince others.

Wow! I had always thought Haskell was a pretty but impractical language. I loved composing elegant Haskell snippets to solve problems that one might encounter in interviews and programming contests, but for real stuff I resorted to C.

Among my concerns is garbage collection: I have bad memories of unexpected frequent pauses in Java programs. But Carmack notes that Haskell’s almost uncompromising emphasis on purity simplifies garbage collection to the point where it is a predictable fixed overhead.

A second concern is lazy evaluation. It’s easy to write clear and simple but inefficient Haskell: computing the average of a list of numbers comes to mind. Carmack is also “still not completely sold on the value of laziness”, but evidently it’s not a showstopper for him. I suppose it’s all good so long as there are ways of forcing strict evaluation.

A third concern (but probably not for Carmack) is that I don’t know how to write a Haskell compiler; I’m more at ease with languages when I know how their compilers work. I can ignore this discomfort, though I intend to overcome my ignorance one day. I’m hoping it’s mostly a matter of understanding Hindley-Milner type inference.

Speaking of types, Carmack is a fan of static strong typing, because in his experience, “if it’s syntactically legal, it will make it into the codebase”. He notes during his recent foray into Haskell, the one time he was horribly confused was due to untyped data from the original Wolfenstein 3D.

Once again, I’m inspired by Carmack. I plan to take Haskell more seriously to see if it really is twice as good. Although I lack the resources to develop a complex game, I may be able to slap together a few prototypes from time to time.

First up is the 15-Puzzle by Noyes Palmer Chapman with a cosmetic change: to avoid loading fonts and rendering text, I replaced the numbers 1 to 15 with increasingly darker shades of grey. 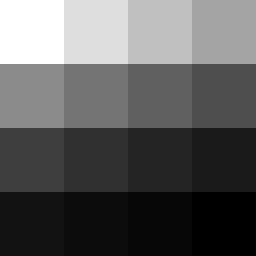 I began with a program depending on SDL. The result was surprisingly playable, and I found the source code surprisingly short in spite of my scant knowledge of Haskell. To better show off my work, I made a few edits to produce a version of my program suitable for the Haste compiler, which compiles Haskell to JavaScript. I added mouse support and tweaked the HTML so the game is tolerable on tablets and phones.